Home » Music » A blast from the past 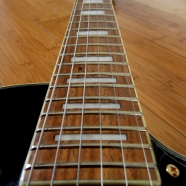 A blast from the past

Back in the 80’s and 90’s in NYC, I had a funk band called, “Your Monkey’s Not Funny.” (And sometimes called, Calamity Jane, Spiny Norman, but never Vicious Fishes.)

There were a lot of members who went through the band – at one point it was 10 members and I wanted to add a horn section to that.  We had a stable line up for a few years and that’s the group that’s playing on the video here.

This is a rough video of a rehearsal for a gig at CBGB from around 1990.