Home » Internet » The Web is where it all went wrong

The Web is where it all went wrong 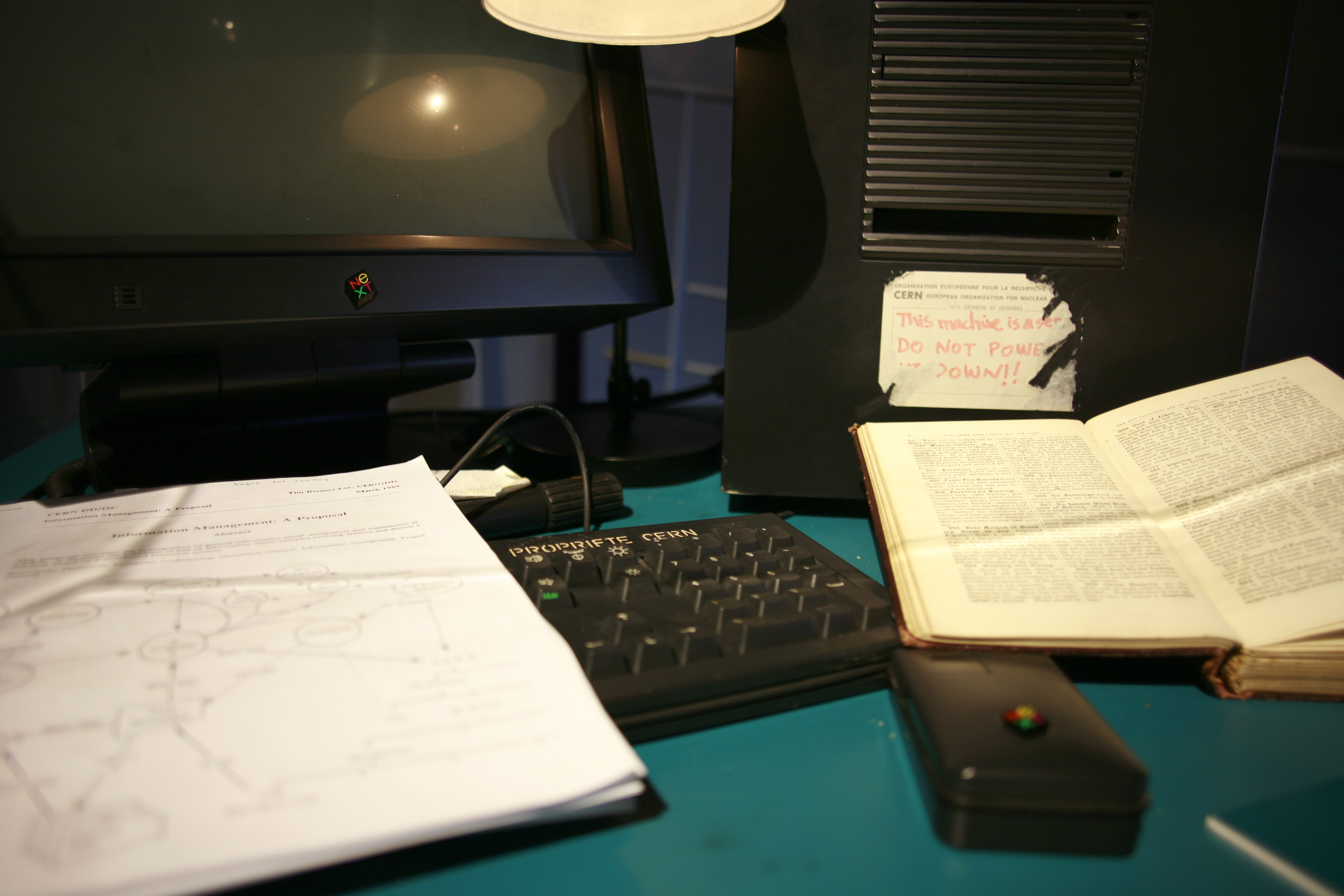 The computer that Tim Berners-Lee used to invent the World Wide Web at CERN. The book is probably “Enquire Within upon Everything”, which TBL describes on page one of his book Weaving the Web as “a musty old book of Victorian advice I noticed as a child in my parents’ house outside London”. (Photo credit: Wikipedia)

Yesterday the internet was alight with celebrations of the World Wide Web‘s 20 year jubilee.

I marked it with a moment of silence in memoriam for the internet that might have been (and possibly could still be).

Don’t get me wrong – I’m a big fan of the web and the irony of the fact that I’m using it to publish this essay is not lost on me.  As a matter of fact, I’m going to be making liberal use of a lot of the techniques I’m going to be complaining about, so this is not an ideological manifesto.

It all boils down to one thing: The Web is not the internet; it’s just something that runs over the internet.

My history on the internet is documented on this site, all over Google and on Usenet. But my network life goes further back than that.  All the way to 1978, as a matter of fact, when I was given an account on Plato when I was at Indiana University. I can’t say I used it a great deal, because, well, it was Plato after all.

The early 80s found me on Compuserve and FIDOnet and I finally joined the internet via Panix in 1993.

My first forays on the internet were a revelation. I quickly became a Usenet, Gopher, and Archie junkie. This coincided with my move from being a band leader to an electronic composer and I found a wealth of advice and free software thanks to the internet. My musical education went into hyperdrive at this point.

The power of this new tool began to bleed into other areas of my life as well. At that time I was working as the Producing Director/Director of New Technology and the New York performing arts organisation, The Kitchen. I convinced the Executive Director, Lauren Amazeen, to let me take The Kitchen online. We made the performance calendar available via Finger  and Gopher and established the email address, the kitchen@panix.com.

Around that time we were approached by Kit Galloway and Sherri Rabinowitz to become a node of the Electronic Cafe network. That kicked off a series of telematic art events that involved performers like The Future Sound of London, David Hykes and the Harmonic Choir, Alvin Lucier, The Deep Listening Band, Mort Subotnik, Troika Ranch, Jaron Lanier, Cathy Weiss, and others. Using the internet and applications like CUSeeMe and Interactor, we did things like sending Alvin Lucier’s brainwaves from New York to Santa Monica, where they controlled a percussion orchestra; sent video between New York and Prague, so Cathy Weiss could perform dance improv with a puppet; and transported the acoustics of Le Thoronet Abbey in the south of France to The Kitchen in real time for a performance by the Harmonic Choir.

All this was done using the internet without the use of the World Wide Web.

And now we come to the point of this essay.

The beauty of the Web is that it is both easy to use and easy to create, which makes it very seductive. And therein lies the problem – it quickly eclipsed everything else being done on the internet and swiftly went from being the most familiar application to the only familiar application. All development effort focused on building websites and the backends to support them. Other promising systems like Gopher, WAIS and Archie were left to wither and die. Out of sheer inertia, HTTP, the transport protocol used for the Web became the de facto protocol for transporting everything, despite the fact that it is wholly inappropriate for file transfers and media streaming. This meant that development work for UDP, RTSP, FTP, and others has been meagre at best. Development of applications hasn’t been immune to this either – promising media systems like the Java Media Framework and SMIL were crushed under the Web steamroller.

Impressive, but can you use it?

Internet development now suffers from the dreaded Law of the Instrument. Familiarly known as the phrase, “ if all you have is a hammer, everything looks like a nail.” Although the web’s version of this is a bit more elaborate. What began as a markup language for hypertext has now metastasised into a Swiss Army Knife (appropriate, since it was given birth at CERN). This is exemplified in the chimera known as HTML5, which fancies itself as an application environment as well as a text markup language. Personally, I’m surprised that this has been endorsed by Tim Berners-Lee, who has attempted to keep the Web pure up to now.

We also saw this type of thinking bleed into other industries as well. The early promise of WAP was scuppered when instead of using it as a way to create lightweight mobile applications in the form of “decks,” developers could not escape the Law of Instruments and focussed only on the WML portion of the spec and used it to create mini websites that were useful to no one.

For a number of years, the World Wide Web Consortium has been leading an initiative called “The Semantic Web.” Whether the aims of this project are feasible or not is outside the scope of this essay. (there’s a whole series of essays on the problems of the misguided reductionist view of the world being forced on us by technologists, but that’s for another day.) What is important about the semantic web is that is is an attempt to fix some of the problems caused by the Web’s half implemented version of the Ted Nelson‘s original vision of hypertext.  I recommend reading Jaron Lanier’s “Who Owns The Future?” to gain a good understanding of the implications of this.

But all hope is not lost. Although it’s decried as not being “open” by people who have a significant financial interest in poking through your data, (Google) app culture is beginning to replicate some of the approaches of early internet applications. The most useful apps are ones that do a single thing and do it very well. I don’t know about you, but I would prefer having a well stocked tool box around the house instead of simply relying on a Swiss Army Knife.