Home » Cutting the cord » Spotify is not a record store, it’s a radio station! 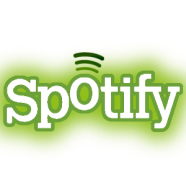 Spotify is not a record store, it’s a radio station! Reflecting on the link I posted about Thom Yorke quitting Spotify, I kept thinking about the statement in the article that, “The industry average offers slightly less than 0.4p a stream – meaning that 1m streams of a song would generate about £3,800. Most songs receive far fewer streams.”

The problem with this statement is that it equates streaming with sales, instead of viewing it as the modern equivalent of spins on radio, which is far more apt an analogy. People stream their favourite songs over and over again. The other problem with the quote is the part that says, “Most songs receive far fewer streams.” That’s true, and what’s also true is that back in the 1980s, the salad days for the record business, most singles sold far fewer than a million copies.

Now, if we start to think in terms of artists of the popularity of Radiohead and higher, let’s look at what the numbers are.

TechCrunch has a list of the top streamed songs: 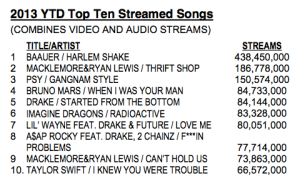 Using the figure quoted in the Guardian article, we get the following earnings:

So, even taking into consideration that Harlem Shake is an outlier, the rest of the top 10 is earning good money. The people who are earning a pittance are either people who would not be earning anything at all from their music, or people like Thom Yorke who would in the past have had that fact hidden from him behind the wall of a big record company advance given for his solo projects in order to keep the cash cow of Radiohead on the label.

Just a quick look through the articles this has generated shows that opinion is split on this issue.

A comment in the original article gets to the heart of the matter. Producer Nigel Godrich says, “Making new recorded music needs funding. Some records can be made in a laptop, but some need musician[s] and skilled technicians. Pink Floyd’s catalogue has already generated billions of dollars for someone (not necessarily the band) so now putting it on a streaming site makes total sense. But if people had been listening to Spotify instead of buying records in 1973 I doubt very much if Dark Side [of the Moon, Pink Floyd’s record-breaking album released that year which sold hundreds of millions of copies] would have been made. It would just be too expensive.”

This is true, but the target is wrong. Spotify is not a record label, it’s not even a music store, it’s a radio station, and no one has ever expected radio stations to fund the creation of new music. This is the problem that needs to be cracked – I plan to discuss this in a future post.